An SMSF is a private superannuation fund, regulated by the Australian Taxation Office (ATO). It is a legal tax structure with the sole purpose of providing for your retirement and operates under similar rules and restrictions as ordinary super funds.

Since the official introduction of SMSFs in 1999, they have grown to represent a significant component of the superannuation sector.

Superannuation is a dedicated vehicle to save for retirement. Contributions made are invested and accumulated until the member’s retirement or another specified event, such as death or incapacity.

An SMSF can have no more than six members. Being a member of an SMSF requires you to actively participate in the fund’s investment, administration and management. In an SMSF, all members take on the responsibility and control of managing all of the members’ retirement savings.

SMSF trustees perform the same role as other superannuation fund trustees; receiving and investing member contributions and making them available as lump sums or pensions to members when they meet a condition of release.

Find out more about:

The Advantages of an SMSF

There are many possible advantages of an SMSF:

Are you suited to an SMSF?

There are no hard and fast rules, but we believe that an SMSF is most appropriate for those who:

Performance of a typical SMSF portfolio

As an SMSF firm, we take a great deal of interest in research that is published by the SMSF Association, the ATO and industry participants such as Class Super, a leading provider of administration software for SMSFs. One of our main areas of interest is the choice of investments by Trustees.

ATO statistics show that most SMSFs have poorly diversified portfolios with significant exposures to just three asset classes. Further ATO data reveals that the average number of holdings in an SMSF is 18. Research by the SMSF Association found that 47% of SMSFs have more than half of their portfolio invested in a single asset class, usually shares or property. Most of those surveyed believed they could achieve diversification by buying a range of shares.

The most comprehensive source of information on SMSF investments is the Class SMSF Benchmark Report. The Report is a statistical analysis of the 160,000+ SMSF administered on Class Super, representing an estimated 27% of SMSFs in Australia. It provides data about what SMSFs are investing in and other metrics.

It is understandable that SMSF Trustees tend to favour investments they’re familiar with. Australian Shares represent 36.3% of assets in the Class Benchmark Report, and 65% of SMSFs have exposure to Australian shares.

The chart below shows the top 20 Australian shares owned by SMSFs. 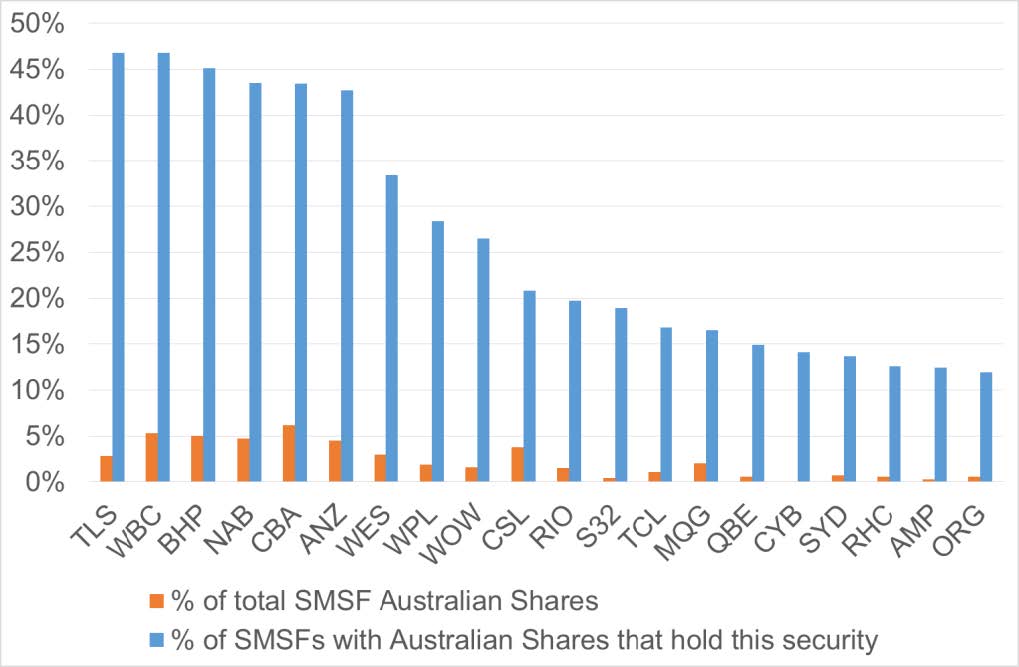 It is evident that there would be many SMSFs that exclusively own Australian shares based on the statistics detailed previously.

It is difficult to ascertain how SMSFs invested this way have collectively performed due to the wide range of direct Australian shares, as the large 20 holdings represent only 46.7% of the total exposure, meaning those outside the top 20 represent more than 50%.

A simplistic way to establish a proxy for how a typical SMSF direct Australian share investor has performed would be to construct a portfolio of the largest holdings in proportionate to how they are currently owned in the top 20. For example, the Commonwealth Bank represents 6.2% of the exposure to Australian shares, which equates to approximately 13.3% of the top 20 (6.2% ÷ 46.7%).

The chart below shows the sector exposure of the largest 17 Australian shares held by SMSFs based on this. These 17 investments represent 45.9% of the total exposure to Australian shares. South32, Cybg PLC and AMP have been excluded, due to their relatively small exposures and short tenure concerning South 32 and Cybg PLC. It is interesting, but merely coincidental, that when a cash account is added in, the total number of investments held in this stylised portfolio would be 18, which, as noted earlier, is the average number of holdings for an SMSF as per the ATO data. 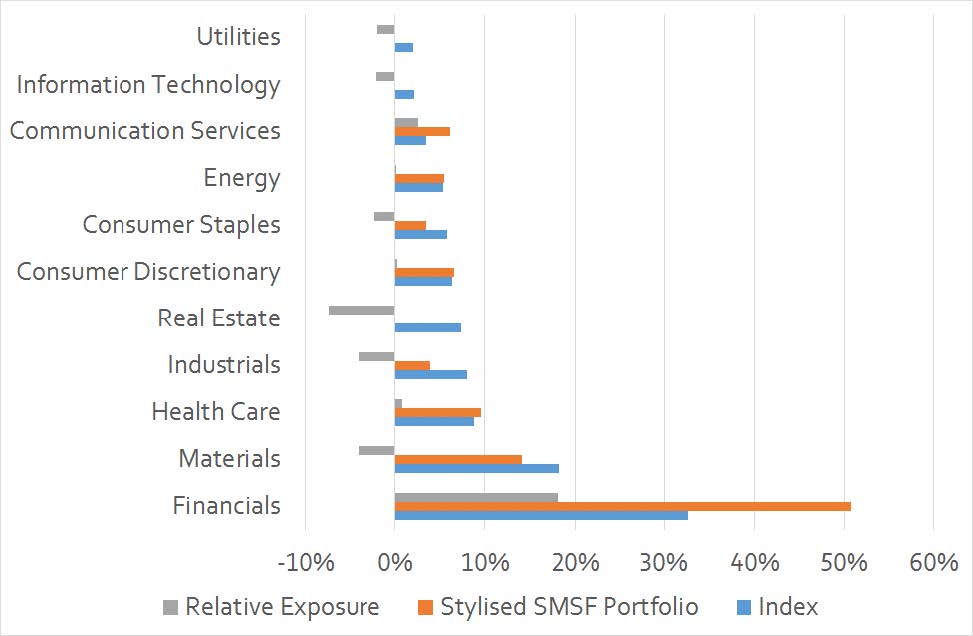 There is a considerable overexposure to Financials at the expense of every other sector, bar Health Care and Communication Services. Diversification within an asset class is just as important as being diversified across different asset classes.

How has a stylised portfolio of the largest direct Australian share exposures performed?

The chart below details how the stylised portfolio has performed since the 1st of March 2013 to the end of 2018 against the S&P/ASX 200 TR Index, a period of five years and ten months. A buy and hold strategy has been assumed and dividends, where received, have been reinvested. Franking credits are not included in either of the calculations: 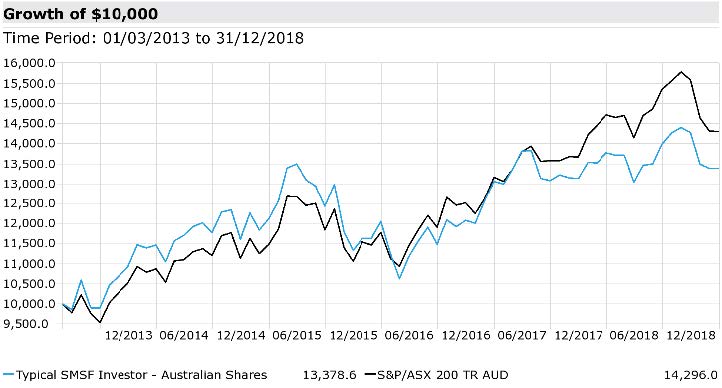 Over this period, the stylised portfolio has produced a return of 5.12% p.a. compared to 6.32% p.a. from the S&P/ASX 200 TR Index, underperforming by 1.20% p.a. The stylised portfolio has also taken on more approximately 10% more risk than the Index as measured by standard deviation (12.3% versus 11.1%), which intuitively makes sense due to the concentrated nature of the portfolio. The maximum drawdown over the time horizon (from the start of April 2015 to the end of February 2016), was 21%. Conversely, the worst drawdown of the Index was 14%.

How has the stylised portfolio performed against a diversified benchmark?

It concerns that only 31% of SMSFs have exposure to managed funds and 20% to Exchanged Traded Funds (ETFs), investment types that can potentially be used to diversify portfolios. Furthermore, managed funds represent only 12% of SMSF assets in the Class Benchmark Report while ETFs represent 3%.

The Australian sharemarket makes up less than 2% of the world’s total by market capitalisation. As such, limiting the pool of investments to Australia restricts the investment potential and diversification benefits offered by the global market.

The notion of not having all your “eggs in one basket” should be a cornerstone for any long-term investment portfolio. If your investment “eggs” are spread across a wide variety of asset “baskets”, then the negative performance of some investments will tend to be offset by the positive performance of others.

The chart over the page compares the performance of the stylised Australian share portfolio and the S&P/ASX 200 TR Index against that of the Morningstar Australia Multisector Aggressive Market Index. The Aggressive Market Index is a benchmark for diversified funds that have more than 80% exposure to growth asset classes such as shares and property, so is an appropriate comparison for the stylised SMSF portfolio. As at 30 June 2018, the Index had a 45% exposure to International Shares. 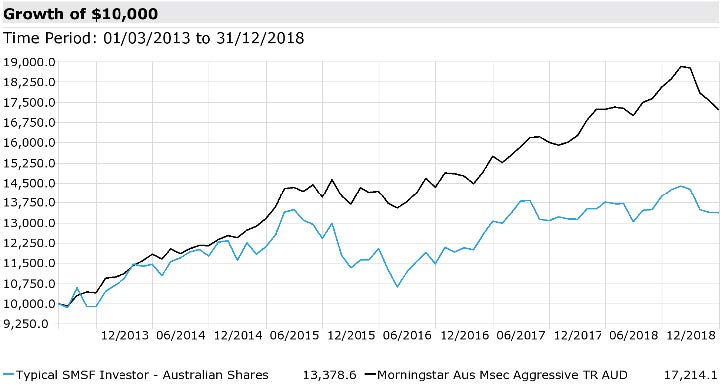 It would appear as though the vast majority of SMSF Trustees remain self-directed and have made decisions that have impacted upon the performance of their portfolios. Unfortunately, a love of domestic banks and corporations such as Telstra has cost many SMSF trustees exposure to overseas assets, many of which have outperformed Australian assets.

Asset allocation decisions are involved and complicated. They require an understanding of a range of different matters. At GFM, we spend a great deal of time using the available tools we have to give us the edge when selecting investments and constructing portfolios.

This is where good advice can make a difference. While an SMSF is ultimately the responsibility of the Trustees to manage, they should be seeking the help of professionals to achieve more optimal investment outcomes.