Each year, the second Tuesday night of May allows us to gain a better understanding of how the Australian economy and Government spending is tracking. It is Budget Night.

Latest figures show the budget to be in far better shape than previously expected; over $7 billion ahead of expectations. In the twelve months to March 2018, the budget deficit stood at $14 billion (around 0.8 percent of GDP) – the smallest rolling annual deficit for nine years. Revenues are around $5 billion higher than forecasts while spending is $3 billion short of forecasts. Positive trends are emerging as shown in the graph below. 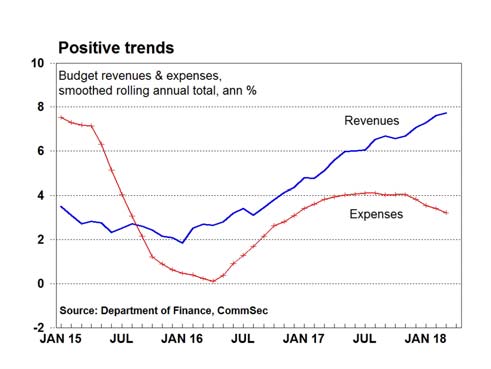 The Government currently expects an underlying deficit of $23.6 billion for 2017/18 with the expectation that the budget will return to surplus in 2020/21.

So what happens from here? Some believe that the Government should stand back, allow a faster return to budget balance and then stabilise or reduce debt. Others believe that personal tax cuts should be made to lift spending and economic growth, address bracket creep and provide incentives for Australians to stay in the workforce.

Tax cuts could prove beneficial to consumer-dependent businesses like retailers. But the tax cuts may be modest and rolled in over an extended period – offering relief rather than a boost to family finances.

The economy is clearly in good shape, as highlighted by the better-than-expected tax receipts. Certainly, the economy doesn’t need an extra kick along as the Federal Budget deficit is narrowing. At the same time, families are adjusting to more modest real wage growth.

However official interest rates are still at record lows. And with low inflation, interest rates don’t need to move for some time. So scrapping of the proposed hike in the Medicare Levy will provide relief to families. Any modest cut to taxation would again provide relief rather than cause people to go on a spending spree.

All will be revealed tomorrow night. We don’t expect any major surprises however we will provide further information post Budget night.

If you have any questions or comments, please email me at denise@gfmwealth.com.au