Listening to Warren Buffett & Charlie Munger is always informative. This year was marked by the typically concise Charlie Munger, known for his usual “I have nothing to add”, answering many questions in depth.

Below are some of the quotes from the recent Berkshire Hathaway AGM, which are a combination of fresh ideas combined with helpful reminders from the past that are still relevant today.

Buffett opened the meeting talking about his first investment. If you were making your first investment in 1942, “all you had to do was figure that America was going to do well over time… You basically had to make one investment decision.”

The ideal investment for Buffett, then, was on American businesses through the stock market. That’s in spite of all the doom and gloom of World War II that would have driven many investors into gold.

Buffett provided the numbers to show that stocks, not gold, are likely to be more profitable over time.

“In other words, for every dollar you could have made in American business, you’d have less than a penny of gain by buying into a store of value which people tell you to run to every time you get scared by the headlines,” Buffett said.

He added. “While the businesses were reinvesting in more plants and new inventions came along, you would … look into your safety deposit box, and you’ve have your 300 ounces of gold. And you would look at it, and you could fondle it, I mean, whatever you wanted to do with it. But it didn’t produce anything. It was never going to produce anything. And what would you have today? You would have 300 ounces of gold just like you had in March of 1942, and it would be worth approximately $US400,000.”

Some other notable comments included the following:

“My theory is that if a business can’t withstand a little mismanagement it’s not a good business.” – Charlie Munger

If a business indeed has a sustainable competitive advantage, then it should be able to recover from temporary mismanagement and regain its past position.

“We don’t foresee things that we don’t have a lot of evidence for.” – Warren Buffett

“If we were assessing Coca-Cola right after it was invented, we wouldn’t have invested.” – Charlie Munger

Buffett remarked that what Jeff Bezos accomplished at Amazon is a miracle and is why they didn’t invest. When something is improbable, and there is no historical evidence to support the belief that it’s going to succeed, it is tough to anticipate the outcome correctly.

“When you buy something where you are hoping that tomorrow it will be priced higher, you are counting on more people continuing to buy it, and eventually it comes to a bad end. Generally, when buying non-productive assets like cryptocurrencies, you are counting on someone else to buy it for more. It has been tried with tulips and other things in history, and usually, it has ended badly.” – Warren Buffett

It would be difficult in the current environment for Buffett not to have something to say about Bitcoin!

“Competitive moats have always been under attack, but the pace of change has become faster than it had been in the past.” – Warren Buffett

Buffett has long celebrated the benefits of moats – which are a crucial component of his stock-picking process – Tesla’s Elon Musk recently spurned the concept entirely during a Tesla earnings call.

“I think moats are lame,” Musk told analysts. “They are like nice in a sort of quaint, vestigial way. If your only defence against invading armies is a moat, you will not last long. What matters is the pace of innovation; that is the fundamental determinant of competitiveness.”

Presented with these comments, Buffett acknowledged that the acceleration of technological advancement in recent years has made more moats vulnerable. However, he still believes the concept is essential.

“Certainly you should be working on improving your own moat and defending your own moat all the time. And Elon may turn things upside down in some areas,” Buffett said. “I don’t think he’d want to take us on in candy.” Buffett often cites See’s Candies as a company with a wide moat.

Munger also mocked Musk’s view. “Elon says a conventional moat is quaint, and that’s true of a puddle of water. And he says that the best moat would be to have a big competitive position, and that is also right. It’s ridiculous. Warren does not intend to build an actual moat. Even though they’re quaint.”

Musk caught wind of the comments. He then announced on Twitter, “I’m starting a candy company and it’s going to be amazing.” 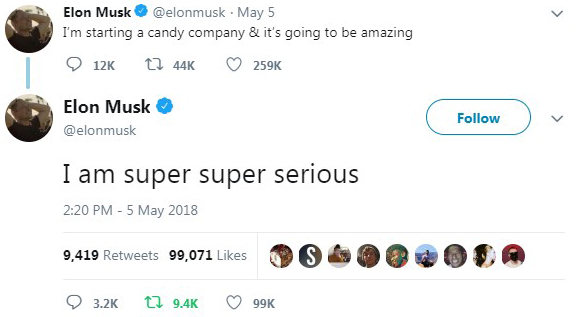 Later, Musk referenced Buffett directly, tweeting that he was “going to build a moat and fill it with candy” to lure Berkshire Hathaway into investing in his confectionery venture.