The 2018-19 Budget will be the last before the next election (due by May 2019) and so it had to provide pre-election goodies but in a way that keeps the return to surplus on track. Thanks to an improvement in the budget position since the Mid-Year review, of around $7bn per annum, this has been made relatively easy. A modest fiscal stimulus will help households, but the main risk is that the revenue boost proves temporary.

The main headline of the Budget is lower personal tax rates to make the system ‘fairer and simpler’. The Treasurer has recognised the current low wages growth (which has averaged only 2.2% a year for the past five years) is negligible in real terms. Growth for the previous decade was about 3.5% a year. Creep in the tax brackets has seen personal income taxes as a proportion of all taxes rise from 17% to 19% in the last five years, and this would increase substantially without tax cuts. The new tax rates will mean that by 2024-2025, about 94% of taxpayers will have a marginal tax rate of 32.5% or less compared with 63% with the current rates.

Here is the impact: 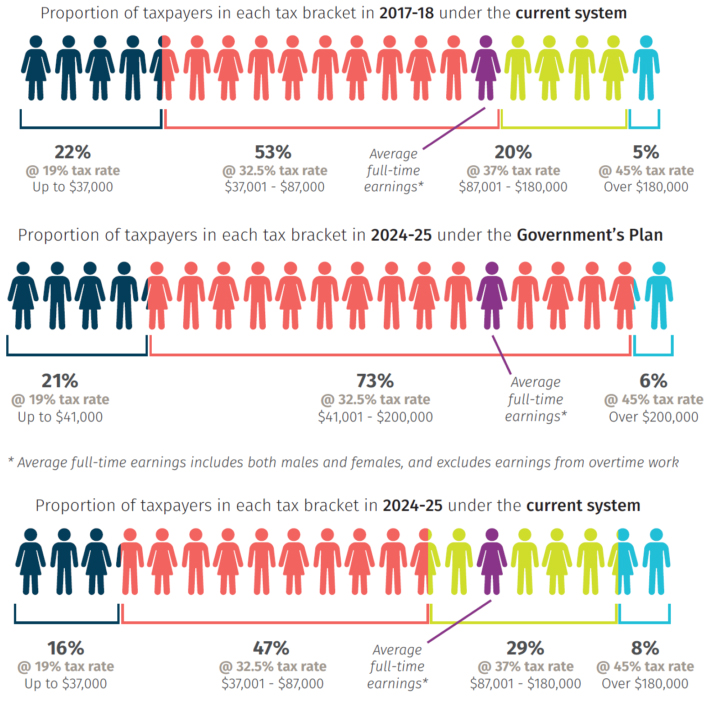 The Government announced a Protecting Your Super Package to commence on 1 July 2019 aimed at ‘reuniting’ Australians with their low balance, inactive superannuation accounts through the ATO. Inactive accounts below $6,000 will be transferred to the ATO to protect from further erosion, and data matching will be used to connect with the member’s active accounts. This technique is expected to push $6 billion in super back into 3 million active superannuation accounts.

The Government will also cap total fees on super accounts of less than $6,000 at 3%, and ban exit fees on all super accounts (exit fees cost members $37 million in 2015-2016). They will also make life insurance in superannuation an opt-in for people under the age of 25, plus those with low balance accounts or inactive accounts. 5 million individuals may save an estimated $3 billion in insurance premiums.

Under ‘More Choices for a Longer Life’, the Government will introduce a one-year exemption from the work test for voluntary contributions to super for people aged 65-74 and super balances below $300,000. This is intended to give retirees flexibility in the transition after work.

The Budget confirms the maximum number of members allowed in an SMSF will rise from four to six to give more flexibility for larger families.

This proposal is one of two significant changes in the Budget for retirement planning, recognising that many Australians have most of their wealth tied up in the family home. The Pension Loans Scheme (PLS) is a reverse mortgage which allows retirees to supplement their income.

Also under the ‘More Choices for a Longer Life’ label, supposedly designed to ‘support Australians to be prepared to live a healthy, independent, connected and safe life’, the Government is expanding the PLS from 1 July 2019. The new arrangement will give all retirees of age pension age (not only part-rate pensioners as in the current scheme) access to this home equity release to supplement income in retirement. Full-rate pensioners can draw an income of up to $11,799 for singles and $17,787 for couples by unlocking equity in their home.

Also from 1 July 2019, the Government will increase the maximum allowable combined age pension and PLS income stream to 150% of the age pension rate.

PLS participants can stop or start at any time and repay the loan if they wish, although this usually happens when the home is sold. There are age-based limits on the loan-to-value ratio, and the current borrowing rate is 5.25% (not exceptionally generous given it has been this rate since 1997).

From 1 July 2019, the Pension Work Bonus will rise by $50 to $300 per fortnight, meaning income from work will not count towards the pension income test up to this limit. When added to the income free area (currently $168 a fortnight for singles and $300 for couples), a single person with no other income will be able to earn up to $468 a fortnight from work and receive the maximum age pension. The Work Bonus applies only to actual engagement in gainful employment, not income from investments.

Building on the measures already announced, such as $5.9 million for ASIC in 2017/2018, this Budget gives $10.6 million to ASIC and $2.7 million to APRA to assist in their involvement in the Royal Commission. Various industry levies will offset the cost. These increases suggest the Royal Commission is providing regulatory authorities with a decent amount of extra work.

The 2018-19 Budget has a practical focus on providing a small boost to households at the same time as maintaining a return to surplus. The main risks are around whether the recent revenue windfall to the budget proves temporary and the assumptions for continued strong revenue growth.

If you have any questions or comments, please email me at patrick@gfmwealth.com.au