The government has recently announced the Australian Federal Government’s Budget outcome for the 2017/18 Financial Year.

The budget deficit reduced for the 2017/18 Financial Year to $10.1 billion, representing 0.6% of Gross Domestic Product (GDP). This is an improvement on the forecasted budget of $18.2 billion four months ago, when Scott Morrison delivered the May Federal Budget.

The budget deficit continues to shrink, with a return to budget surplus very much a focus for the government, sooner rather than later.The deficit figure is hardly surprising as our unemployment rate remains low – more Australians have jobs which boosts tax revenue, company profits are at record highs, further boosting tax revenues and government spending has been restrained, increasing by just 3%. 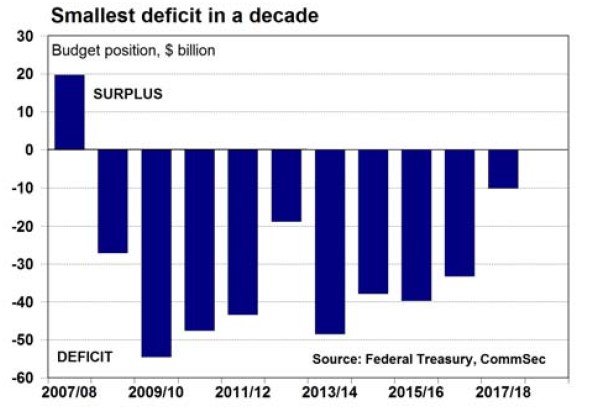 Regarding economic outcomes, movements in receipts, expenses and assumptions made, the Government noted the following:

The Government is currently assuming a budget deficit in the 2018/19 Financial Year of $14.5 billion or 0.8 per cent of GDP. These estimates are seemingly too high and will be revised in the Mid Year Economic and Fiscal Outlook Review delivered in November/December.

The budget outcome should provide Australians with improved confidence regarding the state of our economy. Ratings agency, Standard and Poors has greater confidence in the Australian economy, recently upgrading the outlook for Australia’s risk rating from “negative’ to ‘neutral” , with Australia now a very solid AAA-rated country.

If business and consumers have the confidence to spend, invest and employ then the economy will continue the current momentum it is experiencing. Whilst the Budget is in a reasonable position, there is a risk that both the Coalition and Labour governments will be tempted to ramp up the spending promises coming into an election year.

If you have any questions or comments, please email me at denise@gfmwealth.com.au