Australia’s economy has defied expectations and grown its Gross Domestic Profit (GDP) by 0.7% in the June Quarter. Economists had forecast GDP to grow between 0.1% and 0.6% in the June quarter. 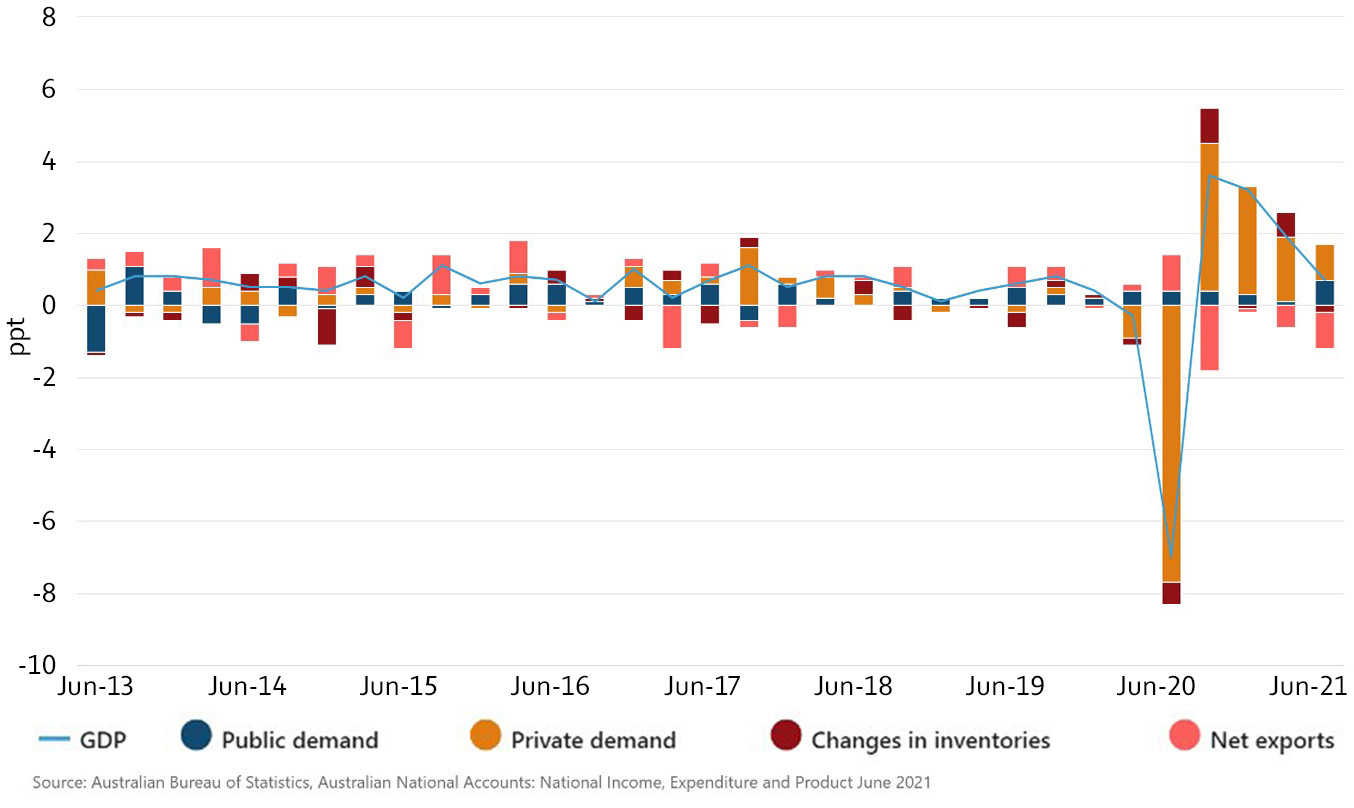 Last Wednesday, data from the Australian Bureau of Statistics showed a lift in government and household spending helped deliver the small rise in gross domestic product.

Household consumption, which accounts for more than half the Australian economy, rose by 1.1% in the June quarter but remained below its pre-pandemic peak.

But the figures for the three months to June 2021 do not paint the full picture of the health of Australia’s economy.

It is expected that figures for the September quarter (July through to September) – to be released in December – will show a significant contraction. This is because of the lockdowns in NSW, Victoria and the ACT, which will likely continue into the December quarter (October to December) as the prolonged stay-at-home orders experienced in NSW and Victoria bite. Should both quarters produce a negative GDP result, Australia will have a technical “double-dip” recession.

In Australia, a recession is often defined as two consecutive quarters (or six months) of contraction – that is, a significant decline in economic activity. A double-dip recession is when a recession is followed by a short-lived recovery then another recession.

This bleak second-half scenario of a double-dip recession also suggests that unemployment could leap toward 6% by October from its current level of 4.6% and not recover for the remainder of 2021. Business confidence is also waning.

To avoid a double-dip recession, Australia needs to emerge from lockdowns in the December quarter soon enough to support a pre-Christmas surge in consumer spending to boost growth.

Following a 0.3% contraction in the March 2020 quarter, the Australian economy (as measured by its Gross Domestic Product or GDP) shrank 7% over the June 2020 quarter, representing the largest decline in quarterly GDP since records began in 1959. On an annualised basis, GDP was a massive 6.3% lower than the 12 months prior. The recession, the first since the early 1990s, was in a class of its own. It was not caused by traditional business cycle triggers such as supply-side shocks or mismanagement of policy settings; it instead reflected lockdown measures driven by public health policies. The COVID 19 pandemic induced an acute economic crisis which ultimately led to a recession. In many ways, mainly due to significant government support, it was a short and sharp recession.

But in 2021, it feels like we are in a different struggle now; it is less acute and more drawn out. The unprecedented government support of 2020 has not been repeated, and a snap back in growth when things return to normal is being questioned.

However, a reopening of the economy may create even more uncertainty with rising virus cases and associated deaths. We also have state leaders indicating they will resist reopening the borders, arguing that the health risks may be too great.

It is now an uncertain time for the Australian economy. Leading into 2022, we may see a significant period of adjustment for households and businesses. A patchy recovery seems more likely than a “snap-back”.

It is also helpful to remember that although Australia is not out of the woods, the country’s last recession lasted less than two financial years (1990–1991), followed by nearly 30 years of economic growth after that.

If you have any questions or comments, please email me at paul@gfmwealth.com.au

Disclaimer: This document is not an offer or invitation to any person to buy or sell any interest in or deposit funds with any institution.  The information here is of a generic nature, and does not take into account your investment objectives or financial needs.  No person should act upon this information without firstly seeking competent, professional advice specifically relating to their own particular situation.